Yard of the Month project instills pride in Boston-Thurmond neighborhood 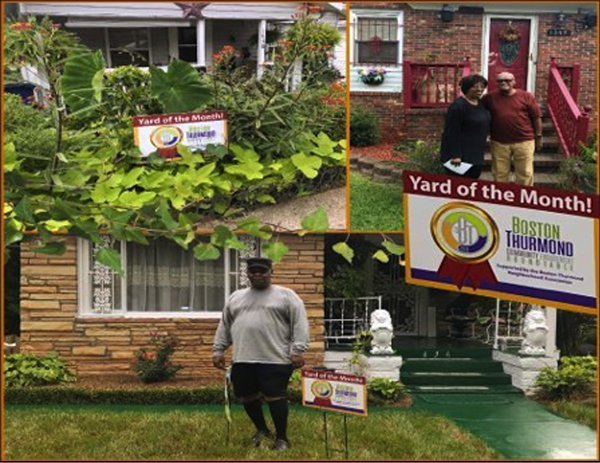 “Mary, Mary, quite contrary, how does your garden grow?” Members of the Safety and
Beautification committee of the Boston-Thurmond Community Engagement Roundtable are on a
mission to find out.

They recently started a new project called the Yard of the Month to bring attention to some of the
well-kept yards in their neighborhood. Like a pebble thrown into a puddle that creates ripples,
the impact of highlighting these yards is that other neighbors have started to improve their yards,
also.

Going down a few of the streets, Lauretta Strong and David West, two of the Safety and
Beautification committee members, pointed out changes they were already noticing throughout
their neighborhood. A strong sense of community is developing, as well as more pride in their
homes, yards and gardens.

West said the committee has developed the mission of improving the quality of living and
enhancing the overall appearance of the Boston/Thurmond community, encouraging neighbors to
take pride in their homes and neighborhood, and celebrating those who have committed to
maintaining yards in a way that complements the community.

The Yard of the Month project runs from May through September. Recognized in July were:

The Boston-Thurmond neighborhood is divided into four quadrants and a winning yard is
selected monthly from each quadrant. The yard is marked by a distinctive Yard of the Month
sign and the homeowner receives a $50 gift card as a reward.

The committee, which falls under the umbrella of the Boston-Thurmond Community
Engagement Roundtable, has a limited budget and West said a donor who prefers to remain
anonymous has generously donated the money to cover the gift cards for the winners for this
season. Committee members are: Lauretta Strong, David West, Ola Brown, and Mary Ford.
Strong said the committee “… needed to figure out a way to engage the neighborhood.” She
added, “We seek out and find the people who are genuinely interested in making the
neighborhood better.”

West and Strong noted that one of the prior winners was in a known problem area for the
residents at one time, but he has influenced neighbors to improve their yards and clean up their
neighborhood by showing he cares and has pride in his home. That small pebble has created
ripples that are spreading throughout the community.

The Boston-Thurmond Neighborhood Association meets the second Monday of each month at
the Martin Luther King Jr. Recreation Center and the Boston-Thurmond Community
Engagement Roundtable meets monthly at various community stakeholders’ locations (schools,
churches, recreation centers). Committees include: Communications, Revitalization, Education
and Health and Wellness. The Safety and Beautification committee would welcome new
members. Neighbors who would like more information can contact Diane Fitzhugh at
fitzemail399@gmail.com.

Boston-Thurmond United is looking for a Financial Compliance Auditor to establish and monitor organizational accounting processes. This is a one-year contract position. Proposals are due May 15. Click below for complete job details.